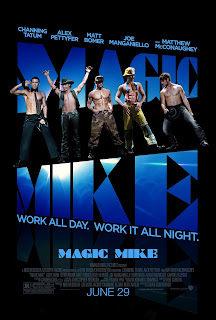 Magic mike, or as most people know it, "the male stripper movie", is a 2012 production, directed by Steven Soderberg and written by Rein Carolin, loosely based on Channing Tatum's early adventures as an exotic dancer. It tells the story of Michael, a wannabe entrepreneur/experienced stripper, who meets Adam, a young and confused guy, and decides to teach him how to party, pick up women, and make easy money.

I admit I had high expectations for this movie. Besides the obvious eye candy, the recent very positive reviews and the fact that Soderbergh was directing it, both made me think I was in for a great, surprising movie. Was it? Not exactly. I liked it overall, but left the cinema with a "Meh, it was OK" attitude. Let's dissect, shall we?

Starting with the good- the direction. His reputation says it all- Steven Soderbergh is a very good director and this movie didn't stray from his usual work. I loved the way he shot some of the scenes, especially when it had to do with close-ups or revealing character development. My absolute favourite has to be the one in which we see Mike getting bored, crashing on the couch and calling Joanna- the camera, the lighting, the setting, every thing was cool and I remember that I had to tell myself numerous time during the screening not to forget to mention it.

The story is entertaining, sometimes funny, awkwardly hilarious in some parts(stripping shows), and it is quite refreshing, especially if you compare it to the usual comedies. A lot of dancing, sexy scenes, drugs and witty dialogue, but I felt the ending was a little underwhelming, story-wise I mean. OK, he figures out he doesn't want to move to another city and goes back to...to...god, I forgot her name (a first sign that the female part was utterly boring and useless). The last lines between the two were actually cool and flirtatious, but the overall ending was just...unsatisfying. The same could be said about the romance in the movie- Cody Horn, although pretty, didn't actually bring anything new or interesting to the table. I was actually more pleasantly surprised by Olivia Munn- short performance, but more believable and appealing than the main girl character.

Speaking of acting, for me it was 80% bad, or let's just say, average- the two exceptions were Matthew McConaughey (as Dallas, the owner of the business) and Olivia Munn. Cody Horn, as the main girl, like I said, gave a stiff performance (or as my friend said: "she had the same pissed-off face the whole movie"). The guys were good to look at, especially Adam Rodriguez, but their dance skills were quite hilariously bad. Channing Tatum was the only with fantastic moves and you could easily see the man has experience. I didn't really care for Alex Pettyfer.

Another interesting thing about the film- I hope I can explain it right. I thought the soundtrack was great, it fitted the stripper scenes, but I did have a problem with the sound or the sound editing- I am not very sure- I noticed in a lot of scenes, especially at the beginning, that the scene was recorded badly, like it didn't have a clear and nice sound to it. I'm obviously not an expert and maybe it was just me, but it bugged me for half of the movie.

To wrap things up, I'll just say that Magic Mike is a good movie and you will be entertained, but don't expect too much from it.
Posted by Diana at 2:42 PM