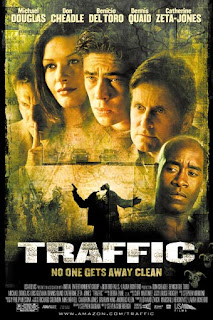 Traffic is probably one of the best dramas, or better said, best political/addiction dramas I have ever seen. Directed by Steven Soderbergh and written by Stephen Gaghan (but based on a miniseries), it focus on drugs, more specifically on a conservative judge who is appointed by the President to spearhead America's escalating war against drugs, only to discover that his teenage daughter is an addict. Winner of multiple awards, including Best Actor in a Supporting Role, Best Adapted Screenplay and Best Director at the Oscars, Traffic is unmissable.

The script, an intersection of stories and characters, is quite intricate and political, but it works perfectly by the end of it. When I noticed this, I thought it would be hard to follow, or it will make me loose the interest, but they connected things very well. My favorite storyline was the main one, that of the judge and the daughter, just because it had so much to provide and prove, and the ending of it was both touching and memorable, as the man who's job was to fight the war, had to quit it in order to survive that same war for and with his daughter.

Another strong point for Traffic is definitely the casting: not A listers, but good, talented actors, who are not in the front of the line, but still do their jobs to the T; people like Don Cheadle, Luis Guzman, Dennis Quaid and others. Benicio del Toro, as Javier Rodriguez Rodriguez, delivers one of the strongest performances of the cast- what I liked most was his way of showing so much emotion and care without overacting or letting on his feelings in a visible way. Other standout performances were those of Catherine Zeta Jones, a woman who I have never seen have a bad day acting, and Michael Douglas, of which I can say the same thing, but also Erika Christensen, who provided the surprise as a young addicted woman who takes the wrong turn in life.

From a filmmaking point of view, it was quite spectacular. Soderbergh's direction was spot on, giving the story a very realistic feel and showing us all the sides of the main topic, without being too subjective on one or another. Shocking and moving examples are most of the scenes with the young woman, like when the teenagers were taking drugs, or the moment in the dirty hotel room with the black guy, but also some of the scenes in Mexico. Similarly, I liked how the cinematography, colors and editing were different according with the set up and the cities (special elements for Mexico, or the blue motif for some of the scenes). All together, the technical elements worked beautifully with the performances of the actors to give us a film worth watching.

Overall, Traffic is a fantastic movie, not only because of the story, its delicate theme and how it was made, but also because it manages to provide a realistic and sometimes shocking view over the drug war. That's probably why I liked it so much- because it told the story of drugs from all points of view: those who buy it, the users; those who sell it and produce it, the cartels; and those who try to stop it, the force. Traffic is a drama you should definitely see, if you haven't already.
Posted by Diana at 4:27 PM