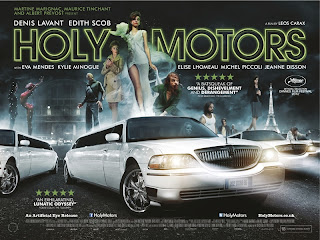 I've been struggling with this review for over a month, for several reasons: first of all, the film was a little complicated and, at times, unbelievable; second of all, I still find it hard to explain and understand the premises and meaning of the movie myself; third of all, all of that just put me off wanting to write it. But I really do have to, so this is my attempt (sorry if I screw it up).

Holy Motors is directed and written by Leos Carax, about...well, here's where things get complicated. The official synopsis on IMDb says: "From dawn to dusk, a few hours in the life of Monsieur Oscar, a shadowy character who journeys from one life to the next. He is, in turn, captain of industry, assassin, beggar, monster, family man..." I believe that it is about a man who gets payed to fulfill other people's dreams and wild imagination, living this fantasy for different period of times(5 minutes or a while night). Basically, that is what he does all day: running around Paris, whilst being driven by an older lady in a white limo, from job to job, doing crazy, unexpected and sometimes, confusing things.

Despite its madness and WTF factor, Holy Motors is definitely intriguing. You are fascinated by the crazy actions, and although, at some point, you might have the tendency to give up, it still keeps you asking questions: is that girl really his? who is Kylie Minogue's character and what does she mean to him? Is it all a dream? Who is the agency? and so many more like that. I won't even talk about the end, because it mean to spoil the film for you, but let's just say that it 1. Clarifies the name for me but 2. Confuses me even more on a more general level of the story. Again, wtf?

From a filmmaker's point of view, it was quite good. Interesting direction, to match its course of action, the score fitted it very well and special props to the make-up department for some of the scenes. Denis Lavant as the main character, Mr.Oscar, is fantastic and I am surprised he hasn't received more praise for his work, but then again, I also think Holy Motors, because of its originality, will, most likely, be left out of the awards season, so ultimately, it doesn't surprise me. Eva Mendez and Kylie Minogue play their parts to the T, but don't get overly excited, there's not too much going on for their characters, in terms of complexity or action.

I know a lot of people didn't have the patience or, better said, were not drawn into the story enough to stay focused or give a shit by the end of it, but for me, it was definitely interesting to watch and experience. I was outraged, shocked, confused, but ultimately, intrigued by it. I can't and won't say too much of it (because I don't want to and, as I said before, I can't)- you need to experience it yourself, but I believe you should give it a try when it comes to your cinemas or local DVD store. Curious to see what you think of it.
Posted by Diana at 5:16 PM